West Norriton Township Public Works Department makes storm preparedness a priority all year round. Salt and other necessary tools/materials are stocked in mid-summer to ensure that The Department has the necessary resources for Township residents to have a less stressful winter.

Please understand the Township’s snow removal process below to make sure everything can go according to plan during a storm:

State snow removal crews are responsible for clearing state roads. These roads are as follows: W. Main St, Trooper Rd, W. Marshall St, Whitehall Rd and Burnside Ave. However, a Township plow will keep their blades down while traveling a state road to assist in the state’s snow removal process out of courtesy and safety for travelers.

There are two aspects of a snow operation - salting and plowing. When roads start to freeze from falling precipitation, salting operations begin on the Snow Emergency Routes and continue until all roads are completed or until it is no longer effective to salt (due to the depth of snow). The more traffic on a road, the more effective the salt. As a result, some residential streets with small amounts of traffic may appear to have not been salted.

Please keep in mind that as temperatures drop, salt becomes less effective. Once the temperature drops below 20 degrees, salt is no longer effective at all.

If snowfall accumulates and plowing is required, salting operations cease. When the snow stops and final plowing is accomplished on all roads, salt is spread again. All roads are monitored for icy spots and re-salted where dangerous conditions persist.

Each property owner should check their mailbox front to ensure that it is the minimum of 6 inches behind the face of the curb, which is within federal postal regulations. Prior to the start of winter, the homeowner should reset any mailboxes protruding past the minimum measurement of 6 inches behind the face of the curb. This will ensure that the mailbox will not be damaged during the plowing operations. Any damage that may occur will be the responsibility of the homeowner, unless the plow truck was directly responsible for the damage.

All basketball backstops should be removed from any Township Right-of-Way, which is generally 1 foot behind the sidewalk. Any damage that may occur during plowing operations will be the responsibility of the homeowner.

As salting and plowing are difficult operations to perform, residents are requested to park in their driveways when snow is anticipated to accumulate 3 inches or more, rather than on the street as per Ordinance #683 (PDF). Please keep in mind that it is almost impossible to keep snow from being deposited at your driveway during plowing, as the plow cannot be lifted or stopped at each driveway as it passes.

If you have your driveway plowed before the street is completed, clear an area to the left of the drive entrance (standing in the driveway, facing the street). When your street is plowed, the snow from the plow can be unloaded in this area instead of your driveway.

Plows sometimes find it necessary to make several passes in order to clear snow all the way to the curb to allow for proper drainage.

Please, do not empty snow from your driveway into the street; this slows the overall plowing operation. Also, if snow that is placed in the street freezes, it can create a traffic hazard. 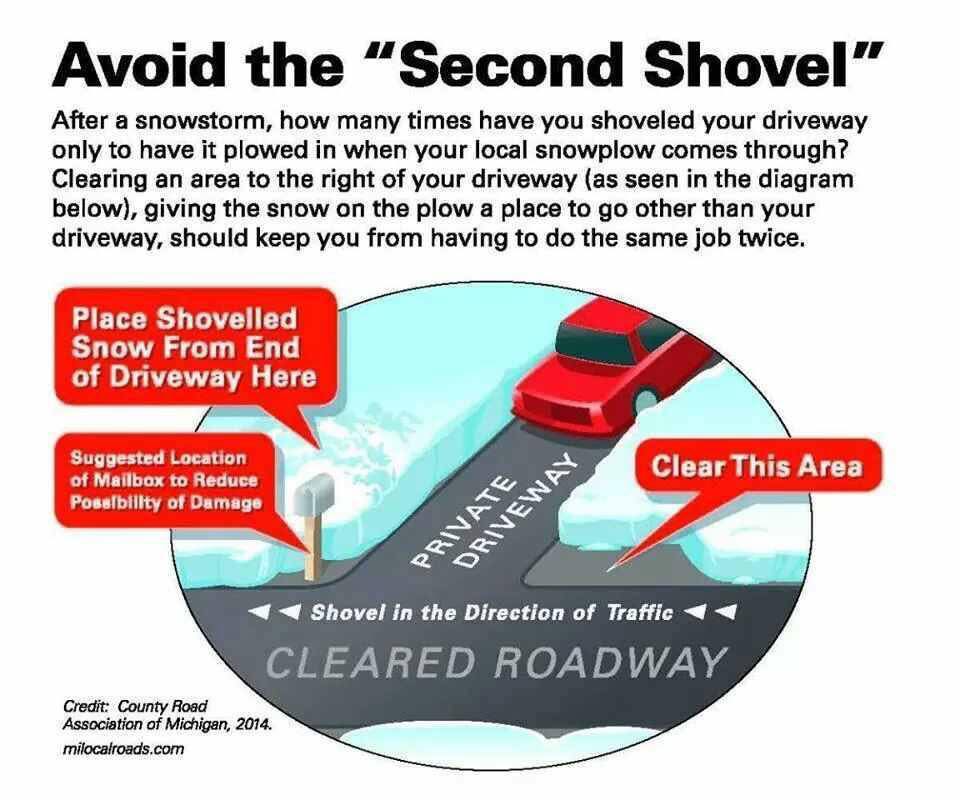 Residents and business owners are asked that, as a courtesy, all public sidewalks be shoveled within 24 hours after a snowfall. Otherwise, individuals could slip and become injured. Remember that it is easier to remove snow before pedestrians pack it down.

If you have a fire hydrant on your property, please clear the snow away from the area around it. This will assist fire crews in the event of an emergency.

Please be patient, snow removal is a difficult and time-consuming process. Since Township crews need many hours of intensive labor to complete snow clearing operations, please try to limit your travel during and immediately following a snowfall unless absolutely necessary. The less traffic on the roads during snow clearing operations, the quicker the job can be accomplished.

Please only call if it is an urgent matter. If snow removal crews are sent off their normal routes on special efforts, it slows down the overall cleanup. Your street will be plowed as quickly as possible.

If you do call to report a condition, the information is immediately dispatched to a truck in your district. There is no need to call a second time.

In the event of a police, fire or ambulance emergency, the Township's plow drivers are dispatched in conjunction with the emergency vehicles.

West Norriton Township would like to thank residents for their continued support throughout the winter season, and remind residents to check on family, friends and neighbors to ensure their safety and wellbeing this winter.